The Path to Victory

From the 1964 Ralph G. Martin book, Ballots and Bandwagons, a compilation of events from five political conventions in the early half of the twentieth century:

“Political Axiom Number One says that the brighter the presidential prospect of victory, the greater the crop of available candidates.”

It is a pretty simple rule, but do you agree with such an axiom?

The media typically plays three roles. In no particular order, the media plays the role of a gatekeeper, scorekeeper, and a watchdog. The media as a gatekeeper simply means that the elites who control a particular news entity decide what gets on the air or in a newspaper. Thus, if the story runs, it becomes news. When the media plays the role of scorekeeper, it tends to add numbers to spice up the content of the story itself. For instance, a reporter may tell you a story about three people injured in a crash or that stock prices dropped by 22 points. Numbers and statistics bring life to a story. When the media plays the watchdog, they are acting as a protector or as an investigator regarding events that might have an impact on your life. An example would be an investigation into government corruption and how that corruption has affected your wallet or pocketbook.

Which of these roles, if any, do you believe is the most important role that the media plays?

The following is an ad from the Ross Perot (I) campaign for President in 1992.  Perot finished third to then-Governor Bill Clinton (D) and the incumbent President, George HW Bush (R).  What are the highlights or lowlights of this ad? Critique it.

Below is an ad for Richard Nixon in his campaign for President in 1968.  He was making a comeback of sorts that year as he had lost in a previous bid in 1960 for President and in 1962 for Governor of California.  The content of the ad is designed to make you draw conclusions about the country’s Vietnam policy under President Lyndon Johnson.  Johnson, a Democrat, decided ultimately to not run for re-election.  His Vice-President Hubert H. Humphrey ran instead.  Humphrey lost and Nixon went on to getting re-elected in 1972 as well.

Based on its visuals, could an ad like this be run today?

A Republican Has Entered…

Freshman United States Senator Ted Cruz (R-TX) is set to announce his candidacy for the Presidency on March 23, making him the first Republican US Senator to announce for the position.

Interest groups are those organizations who influence public policy making from the outside looking in.  They goal is to get politicians from both sides to see their points of view when it comes to a particular issue.  Members of both political parties accept money from interest groups.  Do you believe there should be limits on what interest groups can give to a politician during a campaign? 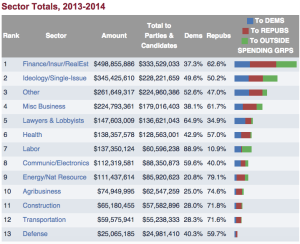 “The ability to change one’s views without losing one’s seat is the mark of a great politician.”

What are your thoughts on this quote?

This is an for Mayor Rahm Emanuel of Chicago.  Emanuel is in a runoff contest against another Democratic opponent, Jesus “Chuy” Garcia.  Some were surprised that the Mayor would be in an April runoff against the lesser known Garcia, but this is where he is.  The ad centers around Emanuel admitting that he has not always been a good listener when it comes to the needs of the people of Chicago.  What is your impression of this ad?  Is it effective?